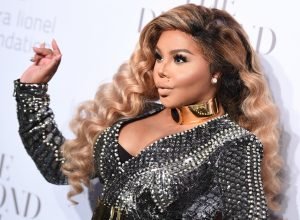 The Queen is back to making new music. Days ago, Lil Kim shared a video clip of herself, Fivio Foreign, and the whole crew getting down in the studio.

She may be hush-hush about whether or not she’s collaborating with her fellow Brooklyn emcee, but Lil Kim did let fans know that she’s been held up in the studio with Tory Lanez. Kim posted a trio of photos that showed the 9 rapper hugged up with a very happy Tory. “Anybody who knows me knows that I love this man and that he’s one of my biggest music idols” the rap icon penned in the caption. “I can’t wait for us to get out of this damn quarantine”

Before the rumor mill could try and theorize about their relationship, Kim nipped any untrue speculations in the bud. She also offered up a bit of information and revealed that Tory Lanez was putting together some magic for her upcoming record. “And before y’all get started wit ya mess me and my friend @torylanez (and one of the executive producer’s of my next album) and I oop! 🙊 😂. We just be having so much fun when we be working in the studio!! I guess it’s safe to say I’m a big fan of Toronto!! Kim added.